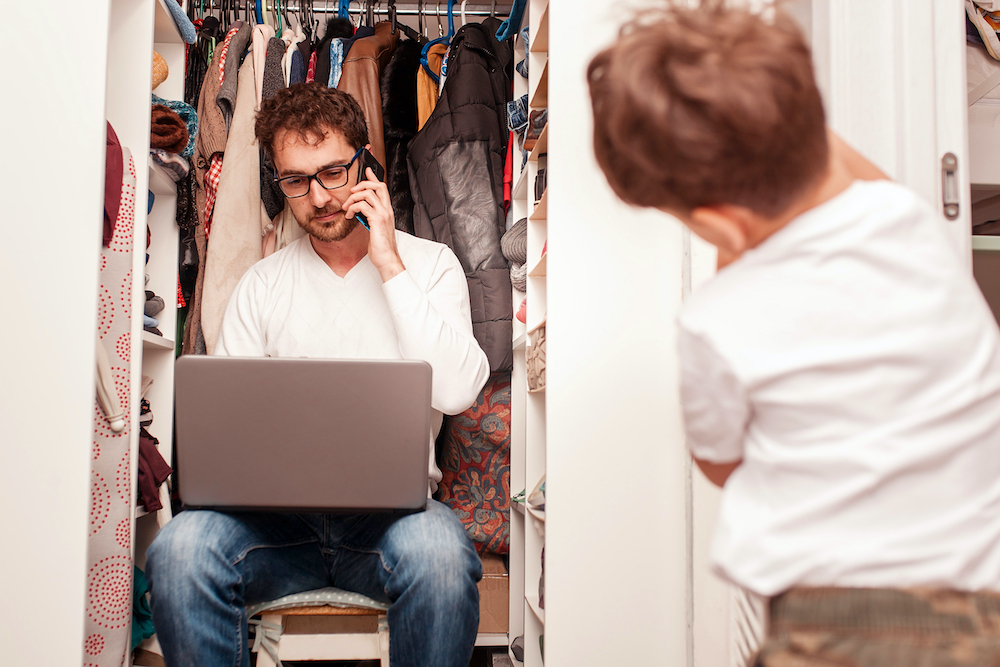 The blur between work and family has never been more blurry.  Family members are all up in your business.  They walk in the room while you are in the midst of an important conversation with your boss, your coach, or the media, as we witnessed in the BBC interview with Professor Robert Kelly. The embarrassing footage went viral.  What we didn’t know was that it was a portender of what we would all face sooner than we really wanted to.

Many of us have been tortured trying to appear professional with our toddlers doing what they do best – being outrageously themselves.  Or, our teenagers, or the family dog.  The nature of the pandemic and lockdown means that we are ALL together all the time.  In some families, three and four generations all together.

One of our executive coaches was on a video call with a client recently.  The feedback that the client had received as part of her development was that she often engages in reactive pleasing, complying behaviors, especially with her supervisor and other senior leaders. In other words, she doesn’t hold her ground as a leader but rather, submits to authority figures.

This was confounding to her. She sees herself as action-oriented and focused.  She argued against the data and feedback. It turns out that pleasing was in her blindspot.  And my colleague wasn’t sure how to help her bring it around in front of her to have a good look at the unconscious pattern.

Just then, her three-year-old grandson ran through the room screaming. The client was contrite.  “Hold on just a second, let me put you on mute.  I will handle this.”  She harshly removed her grandson from the room and returned to the call, smiling and apologetic.  There, the pattern she had received feedback about was laid bare before her.  The coach could point to it and the client saw it.  She had automatically and unconsciously engaged in pleasing her coach while taking strong action in “handling” her grandson. She had little to no attention on the impact of her harshness with the boy.

Consider that in any moment where you try to show up and please an authority figure, you aren’t connected to the larger sphere of relationships and your impact over there.

The real question was, what is the belief that was driving her pleasing behavior? This was the real work.  It might be, “In order to succeed, I have to please those who have power over me.” Or, “I have to look polished and professional in order to maintain authority.”  Finding the belief that drives behavior is difficult work. Beliefs often go unquestioned and live unchallenged.

Once surfaced, we might ask, “Is it true?”  Might this leader maintain authority in other ways than trying to look polished and professional?  What are the creative ways leaders are asserting their authority in these disruptive times?  Can we learn new ways of leading?

Here’s the beauty of this situation: this leader accessed a breakthrough in her own understanding of herself that was made possible because her work life and home life were irretrievably intertwined.  There was no separating her work persona from how she engaged at home.

It’s important to note that people often bring their filtered selves to work.  In the good old days, we used to commute and put on the persona of a business leader like we put on a suit jacket. Unconsciously we drive some behaviors underground as we step into our offices.  Many leaders report that they are far more short-tempered and impatient at home than they are at work.  Their belief is that there is more at stake, more to lose at work.  Is there? Isn’t the loss of your family’s trust and connection a lot to lose?

The good news is this.  The persona we project at work is being disrupted in the pandemic.  We can’t hide who we are, where we live, how we react or interact with our family members. We are being called to be more integrated – the same person at work and at home.

I challenge you to identify the belief beneath any behavior that is unproductive.  It will serve you to take advantage of the massive leadership learning that is available right now in your WFH situation.